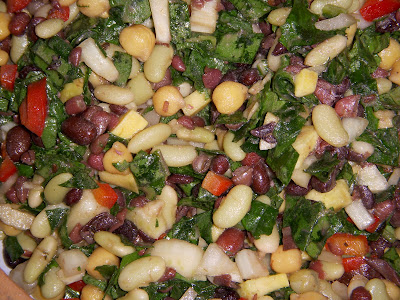 (Photo: Kale-bean salad close-up)
For days after first tasting my husband's kale slaw, I kept thinking it reminded me of something else I had eaten, in fact eaten a lot of. Hmmmm, it finally came to me (aha!) that the dressing was very similar to my mother's recipe for a 3 bean salad. Thus, my recipe is a variation of Dick's kale slaw with several types of beans added to more mimic my mother's bean salad recipe and a couple of other changes, which turned out to be a very pleasant taste surprise.

I took this dish to the first picnic of the Michigan Lady Food Bloggers in July 2008. It was a hit (!!), so we have made it several times since. I included this dish as one of my three favorite kale recipes when I was interviewed about the health benefits of eating kale on the radio show 101 Foods That Could Save Your Life (to be aired February 28, 2009)

Method:
1) I washed the kale, trimmed away the big or tough stems, shook the leaves dry, then spun them in the salad spinner to dry even more (surprisingly little water was left after shaking dry initially). I diced the leaves into small pieces with a chef's knife. It sounds like a lot of work, but the dicing went quite quickly. In fact, I had picked more than enough kale from our garden.
2) Dice the onion, fennel, and red pepper.
3) Toss all together with the kale and beans in a very large bowl.
4) Add the dressing and toss again. This dressing recipe made the bare minimum of dressing for this amount of salad. I think next time I might experiment with making 1-1/2 times the dressing amount.
5) Allow to marinate to blend flavors, then transfer to a serving bowl where all the beautiful colors of this salad can be seen and appreciated.

I was worried both that the fennel would be too strong or that it would not be discernable. However, I was as pleased as could be at the subtle flavor that the amount of fresh fennel and seeds I used contributed to the overall salad. One friend attending the picnic where I took this salad said she didn't think she liked fennel but maybe she did! I don't recall that my mother ever used fresh fennel or fennel seeds in anything she cooked. I think adding the fennel and kale makes a refreshing update to her bean salad (which was my only introduction to dried beans while growing up).

Make a large batch of this colorful and delicious recipe, and enjoy 'good eatin' along with your good health for several days this week. :-)

Where kale is more than decoration on my plate!
Diana Dyer, MS, RD
Posted by Diana Dyer at 3:15 PM

So what types of kale do you grow? You mentioned a variety of types.

The first variety I planted was Early-curled Siberian kale, an heirloom seed directly from the Monticello gardens, home of Thomas Jefferson. Some of these plants have overwintered nicely thus I have been able to collect seeds and keep it growing. We also grow a mixture of 5 varieties of Wild Siberian kale (Territorial Seeds), lots of red stems and leaves, blue kale, flat and curly leaves. We replanted several rows of that at the end of last summer, which I harvested up until the final heavy snows in December. I am hoping that some of that comes back!