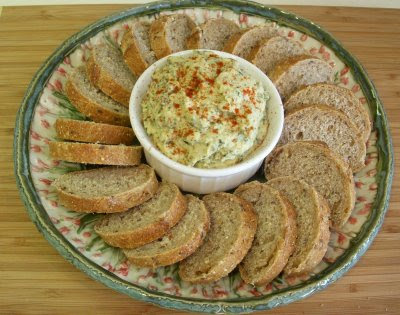 Remember the spinach dip we all began making years (maybe decades) ago? The recipe is commonly served in a bread bowl and typically has used mayonnaise, sour cream, and some dried soup or salad seasoning for flavor, being very tasty but unfortunately also very high in total fat, saturated fat, sodium and low in fiber. Actually I had completely forgotten about that dip, having not made it or even seen it at parties for probably 20 years! So imagine my surprise when I had my husband taste the following recipe I created this afternoon and he said "this reminds me of that old spinach dip recipe, only better!"
He was right, by golly! I could not put my finger on exactly why I felt something stir in my memory "way back there" when I tasted this recipe, but as soon as he said that, I had to agree with him! I took this new dip recipe to a meeting of dietitians today. Dietitians love food but are discerning tasters, so the many compliments received for this recipe are high praise indeed.

This hummus recipe gives extra bang for the buck by including kale. Not only is a health-promoting Brassica vegetable incorporated in an unexpected recipe, but the hummus is both beautiful with the green flecks and has a texture that has some interest to it while also being "lighter" than a typical hummus.

I served it with some thinly sliced whole grain baguette, topped by just a couple shakes of smoked paprika for a touch of color and added flavor. Not much was left after our meeting, maybe just enough to top a baked potato for lunch this week, one of my favorite ways to eat hummus!

Notes:
• This recipe can easily be doubled. Just be sure to use a larger food processor than a mini-size.
• Try some other greens, too, like collard greens, turnip greens, Swiss chard, or even spinach.

Instead of an old recipe that was high in fat and not particularly healthy, Hummus with Kale is a healthy, delicious, quick, and easy recipe that will please and expand your family's taste buds.
Where kale is more than decoration on my plate!
Diana Dyer, MS, RD
Posted by Diana Dyer at 11:30 AM

This sounds great! I added some kale to a bean spread/salad I made earlier this week and it was wonderful. Here's my bean salad recipe.

I'm always on the hunt for new recipes with Kale and this one sounds amazing. Gonna try it tonight!
Thanks for posting it.

My family loves hummus! I love the idea of adding kale - so healthy.

I try to make my hummus recipe even healthier by reducing the oil by 50-100% and substituting the liquid from the can of chickpeas - it may take a bit more of the liquid to get the consistency I like. I also add a bit of minced garlic.

I am loving many of your recipes and will be experimenting over the next few weeks. Thanks for sharing!

Just found your blog looking for a kale/spinach dip...looks fantastic. I'll be back and am trying this hummus tomorrow with friends!

i really love your site! in my efforts to eat in season here in virginia, i have been trying a lot of kale recipes. kale chips are my new favorite snack - i will definitely have to try this kale and hummus dip. thanks!

This is great, love this site.

Thanks to all for visiting my kale blog and finding this terrific recipe.

I have my garbanzos ready and kale in the refrig to make this hummus again. I also stopped at our local Middle Eastern grocery store to re-stock up on a supply of sumac, which I often use to decorate (and add extra zing) to hummus, salads, soup, etc, etc. One of these days (when I have nothing else to do - ha!) I will look up what is known about sumac. I'll just bet it contains its own array of health-promoting molecules.