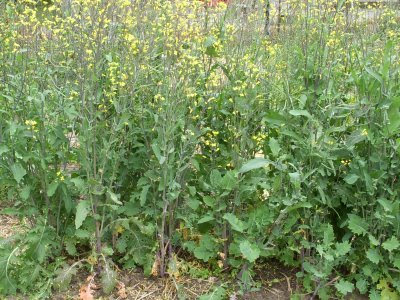 (Photo: Kale flowers on the over-wintered Red Russian kale in our Project Grow community garden getting ready to make zillions of kale seeds, if I don't eat all the flowers first!)

After 3 busy months (read my full update at my dianadyer blog post today), I am ready to start blogging again. I have missed doing so and have lots of ideas backlogged to post up. My life going forward is also going to be very busy, but my hope is that it will be busy in a more controlled chaotic way, rather than just plain chaotic, so that I can keep up with some regular postings.

This "hedge" of kale started with a packet of seeds purchased at Monticello, Thomas Jefferson's home in Charlottesville, VA, and planted in our community garden during 2007. We harvested the kale through the late fall of 2007 and then just left all the plants in the garden without cleaning them out. Most of the plants died back, but one "came back" in the spring of 2008, which we watched both flower and produce seeds that were subsequently collected and planted in the late summer of 2008 in a raised bed after the garlic was pulled out. We did mulch this bed of kale during the winter 2008, and much to our happiness, ALL of these plants came back in the spring 2009 (thus this summer "hedge" of kale in the photo).

We now have plenty of kale to eat on a daily basis (still edible the second year although the leaves are not nearly as big) plus even the flowers and tender early seed pods are tasty and edible (I use them raw in salads). Perhaps cutting some flowers and early seed pods to eat stimulates the plants to produce more and more and more flowers and seed pods as there is clearly no shortage. In fact, the kale hedge is now nearly always flat on the ground in our garden from both the weight of the zillion mature seed pods and the flock of House sparrows that is always hanging out in the hedge, scattering in a hundred different directions in one big fluttering poof! when we walk up to our garden. I'm not sure if this raised bed will have a zillion-zillion kale plants growing voluntarily next year (or this fall!) or if the sparrows have been diligent and efficient in finding and eating all of the seeds that have fallen. I'll be sure to watch.

In any case, I think we have found one strain of this variety of kale that has the natural genetics to withstand the northern cold winter. It will be interesting to see how many years we can keep it going strong! I am collecting seeds now for a fall crop and also next spring. 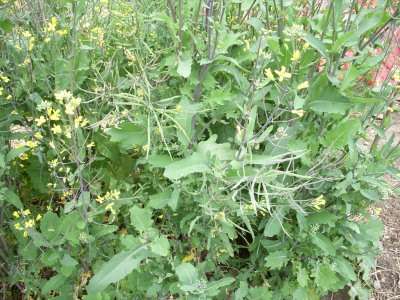 (Photo: Kale with flowers and early seed pods - the spiky things near the center and on the right of the photo. The pods eventually dry and turn brown with the tiny black seeds just exploding out of the pod when touched, scattering to all corners of the garden unless you can carefully catch them into some type of container such as ziploc bag or even a garden hat!)
It's great to be back - where kale is still more than decoration on my plate!