Based on my last post regarding cooking techniques, I decided to try steaming kale instead of stir-frying for this recipe it in order to retain as many healthful molecules as possible.

I love just looking in my refrigerator and cleaning out ingredients to come up with something tasty, healthy, and easy for supper. This "Simple Kale Supper" fits that bill. 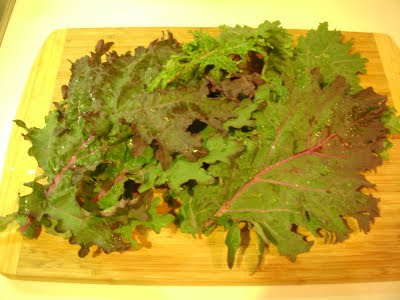 Special note: These ingredients are what I had available. Use what you have: for instance you might have a small amount of left over chicken, beef, fish, or even some dried beans, in addition to many other little bits of fresh vegetables you wish to use up. You may have some left-over pasta or grains of some type instead of needing to cook up some rice. I have even served stir-fried vegetables over torn up toast pieces in order to use up a loaf of bread. Be creative - don't feel beholden to my recipe!

Directions:
1) Start the rice cooking if that is what you are going to serve the vegetables over. I admit to just loving my rice steamer. I can get the rice started, plan on finishing up the recipe in ~1 hour and then forget the rice. No worries about having it overcooked or undercooked. 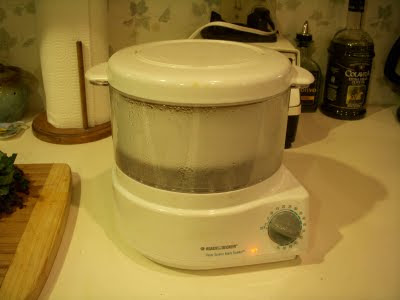 2) Drain, pat dry and chop the tofu.
3) Chop your vegetables 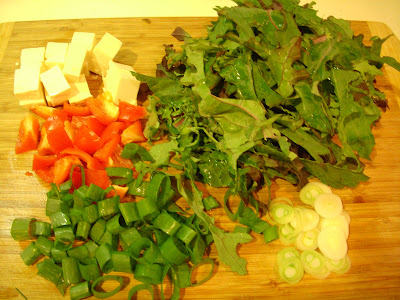 (Photo: Tofu and vegetables chopped and ready to go)
4) About 15 minutes before your rice steamer is finished, steam the kale in a steamer just until wilted and tender (no more than 5 minutes). Save the water in the bottom of the steamer for soup broth later in the week. Or freeze for use at some future date. 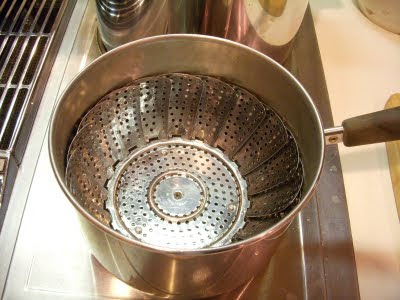 (Photo: Vegetable steamer - I love this gadget!)
5) About 5 minutes before your rice cooker is ready to "ding", start heating the oil in your wok or pan for stir-frying the tofu and vegetables. Quickly stir-fry the vegetables and tofu until the tofu is browned and the vegetables are hot. Add the steamed kale, stir to distribute evenly.

6) Spoon ~1 cup of the rice on each plate and split the vegetables and tofu in half and distribute over the rice. (I will put extra rice into freezer bags to have for a quick supper (i.e., my own fast food) in the future).

7) These ingredients as pictured served two hearty dinners. Increase amount of tofu and vegetables for more servings or for left-overs to have for lunch tomorrow. 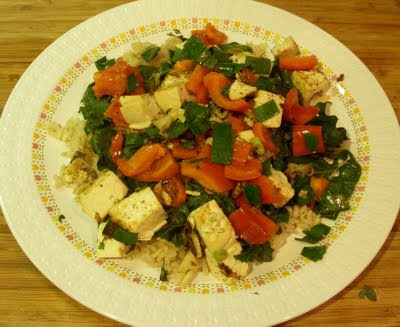 Steaming the kale is an extra step, but not really excessively time-consuming. It does result in one additional pan and the steamer that need to be washed, but they are easy enough to do by hand without even taking space in the dishwasher.

Simple, easy, healthy, beautiful and you cleaned out your refrigerator without any delicious and costly vegetables going "slimy" and into the compost pile.

What's in kale and how to keep it there! 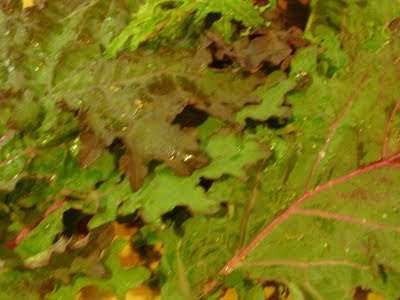 (Photo: Fall harvested kale from our community garden, multiple curly varieties)
A reader recently asked a good question about which cooking methods cause the most loss of nutrients in kale; specifically he was wondering about the relative benefits of raw versus steamed kale. Reading a number of research studies investigating this question in Brassica vegetables shows a variety of answers. However, here are abstracts from two recent articles:

The effects of five domestic cooking methods, including steaming, microwaving, boiling, stir-frying, and stir-frying followed by boiling (stir-frying/boiling), on the nutrients and health-promoting compounds of broccoli were investigated. The results show that all cooking treatments, except steaming, caused significant losses of chlorophyll and vitamin C and significant decreases of total soluble proteins and soluble sugars. Total aliphatic and indole glucosinolates were significantly modified by all cooking treatments but not by steaming.

In general, the steaming led to the lowest loss of total glucosinolates, while stir-frying and stir-frying/boiling presented the highest loss. Stir-frying and stir-frying/boiling, the two most popular methods for most homemade dishes in China, cause great losses of chlorophyll, soluble protein, soluble sugar, vitamin C, and glucosinolates, but the steaming method appears the best in retention of the nutrients in cooking broccoli (I suspect the same will be true for kale and other Brassica vegetables).

This next abstract shows the many points between raw, cooking, consumption, and absorption that influence the potential outcome for health-promotion from eating Brassica vegetables.

Bottom Line? Enjoy all varieties of kale and other Brassica vegetables using all methods of preparation, however, it seems prudent to consume as much as possible either raw (well-chewed or put into a smoothie) or lightly steamed to maximize their cancer-fighting potential.