A recent 12-year prospective longitudinal study of 59,000 African American women has shown that those who consumed more vegetables per day and per week are less likely to develop estrogen receptor-negative breast cancer than women with low vegetable intake.  The incidence of ER-negative/PR-negative breast cancer was 43 percent lower among those women who were consuming at least two (of any kind) vegetables per day compared with women who ate fewer than four vegetables per week. These results are important because African American women are more likely than white women to be diagnosed with estrogen receptor-negative tumors, which have a poorer prognosis than estrogen receptor-positive tumors.
However, what caught my eye was the following information. While looking for some more detailed information within the food frequency data, researchers also found that higher intake of cruciferous vegetables (Brassicas) in particular showed a reduced risk of breast cancer overall in this group of women (all types of breast cancer - some good news!). Cruciferous vegetables, which include kale, mustard, and collard greens, broccoli, along with cabbage, cauliflower and the rest of the vegetables on the list found on the right side of this blog, are sources of the group of phytochemicals called glucosinolates, which may play a role in preventing the development of breast cancer through their effects on both estrogen metabolism and detoxification enzymes.

Again, very simply, our body has two sets of liver enzymes involved in detoxification. Brassica vegetables have been shown to decrease some Phase 1 enzymes, which can actually create a carcinogen, and have also been shown to increase Phase ll enzymes, which work to convert toxic or carcinogenic molecules into less potent molecules that can be less toxic and also excreted quickly into urine.

These are just two ways that eating Brassica vegetables can potentially decrease the risk of developing breast cancer. The amount to eat of these vegetables to consume on a daily or weekly basis is not clearly defined, but clearly this study shows that consuming even modest amounts of vegetables of any kind (two servings per day) can significantly reduce risk of a type of breast cancer that has a poor prognosis when diagnosed in African American women, and other researchers have shown that 3-5 servings per week of Brassica vegetables can reduce cancer risk.

We're lucky that locally-grown Brassica vegetables are available nearly year round, especially since many farmers in northern areas are erecting hoop houses (passive green houses) in which greens like kale can be grown even when it is cold and snowy outside. In addition, kale and many other Brassica vegetables survive and even love that first frost, turning just a tad bit sweeter. Head down to your local farmers' markets to purchase kale and Brussels sprouts as just two examples of breast-cancer fighting Brassicas! 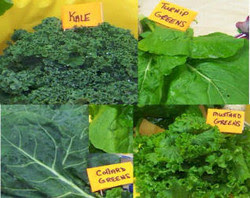 Where kale is more than decoration on my plate (a minimum of 3-5 days per week)!
Diana Dyer,  MS, RD
Posted by Diana Dyer at 9:40 PM No comments:

Email ThisBlogThis!Share to TwitterShare to FacebookShare to Pinterest
Labels: Research

BBBB - That is a mouthful!!

In a nutshell, highly regarded scientists at The University of Illinois have shown for the first time (in rats) that sulforaphane, a potent cancer-fighting molecule in broccoli, can be released from within the food matrix by bacteria in the lower gut and then absorbed into the body in quantities large enough to have anti-cancer benefits.

That is great news, to actually demonstrate what had been hoped for but not perfectly clear in the past. We have millions, billions, maybe trillions of good bacteria in our large intestine (colon) that are doing a myriad of jobs as they munch away on remnants and components of our food that have not been absorbed by the small intestine. I have heard a scientist stand up from the audience at a National Cancer Institute-sponsored conference to say that without starting to study the actions of these bacteria in the colon, all other research involving food and nutrients' potential role in cancer prevention/survivorship is vastly incomplete and essentially uninterpretable.

How to increase the number of good bacteria in your gut? Please don't wait for (or pay for) the dietary supplement industry to develop a pill that combines a single molecule like sulphoraphane and some friendly bacteria (probiotics) or some "bioactive food constituent" to feed these friendly bacteria (prebiotics). Eat more foods that contain live and active probiotics (examples being cultured dairy foods, miso, tempeh, sauerkraut, kimchee) or prebiotics (foods containing digestive-resistant fiber, inulin, some examples being onions, leeks, apples, oats, barley). This is easy and delicious to do with foods without adding expensive dietary supplements.

The other important point from this research was the comment by the scientist that eating broccoli (or other brassica vegetables like kale) at a frequency of 3-5 times per week is enough to achieve a level of sulphoraphane in the body that has anti-cancer effects. However,  remember that these vegetables have many other molecules that are helping to optimize health and wellness, including an anti-inflammation effect which is important at reducing risk of many of the debilitating chronic diseases. So again, the message is food food food - find different foods to eat, different ways to prepare them, and enjoy cooking and eating them!


The study is the cover story of the November 2010 issue of the new journal Food & Function (Vol. 1, pp. 162-167) and is available online pre-publication at http://pubs.rsc.org/en/Journals/JournalIssues/FO . The research was funded by the USDA. 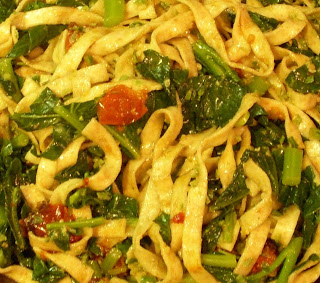 Where kale is more than decoration on my plate!
Diana Dyer, MS, RD


Don't show these
More:
Get AddThis for FirefoxPrivacyAddThis
Bookmark & ShareX

Email ThisBlogThis!Share to TwitterShare to FacebookShare to Pinterest
Labels: Research

Another good laugh - a song this time!

I am not sure when or how kale became a "hot item", but I sure am glad it has. Greg Klyma, a singer-songwriter from Buffalo, NY, sent me a video of one of his recent songs "The Kale Store".

Yum, yum, yum - watching this short video will have you also wearing a t-shirt that says "Eat More Kale" and singing along with Greg about "The Kale Store"!!

Where kale is more than decoration on my plate - it's fun and a song, too!
Diana Dyer, MS, RD
Posted by Diana Dyer at 2:27 PM No comments: