Two recipes for one today! I lost track of the number of times my husband said "This is great!" while eating the soup, and he even said that about the fresh kale leaves sprinkled with cinnamon and sugar as a shout-out to Denmark's traditional food eaten for good luck on New Year's Day.

So here is what I did for the soup recipe (inspired by a recipe using garlic and spinach recently published in the New York Times).

6 cups stock (I used 4 cups chicken stock with bits of chicken plus 2 cups garlic broth but any combination of vegetable, fish, or other stock can be used - I am going to try this next using some of our frozen fish/seafood stock)

Salt and pepper to taste

2-3 large garlic cloves, minced (I used 2 VERY large cloves of a variety of garlic called Music, which was probably about 1/4 cup of minced garlic)

1) I used my crockpot to make this soup by first thawing all the frozen broth in the crockpot, adding the bay leaf, parsley and thyme after the broth had come to a slight simmer.

2) Then add the chopped garlic, turn to high and simmer for 30 minutes or so.

3) Add the tomatoes and chick peas, heat up to a slight simmer on high, about another 30 minutes or so.

4) Add the cooked al dente pasta, remove the bay leaf (do it now before adding the kale or spinach)

5) Beat the eggs in a bowl with a whisk, stir in ~1/3 cup broth (make sure it is not boiling hot), and then stir in the cheese.

6) Remove the bay leaf. Stir the chopped kale into the soup in the crockpot, simmer for a few minutes, then slowly add in the egg mixture, making sure you get all of it into the soup. Turn heat down to low or 'keep warm' on the crockpot and stir slowly until the eggs have set.

7) Taste for any additional salt or pepper needed and serve immediately. 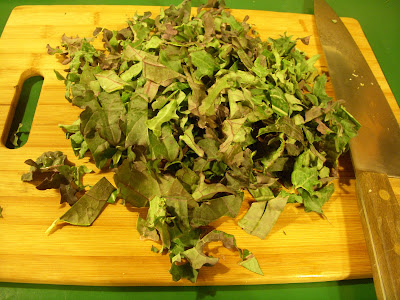 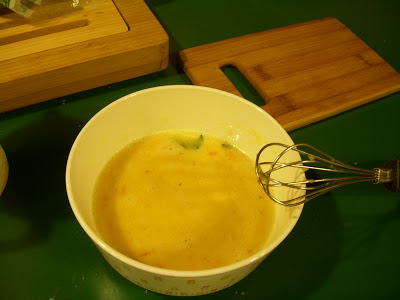 Eggs, cheese, and broth stirred together ready to add to soup 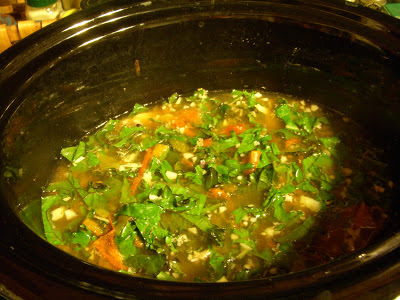 Soup in crockpot before the egg mixture is added 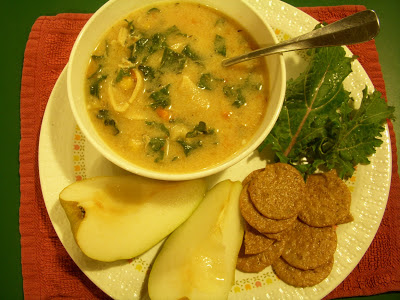 There are many recipes on the web for kale chips sprinkled with cinnamon and sugar plus at least once source that says kale is cooked with cinnamon and sugar and then served with a white sauce on New Year's Day in Denmark, but to be honest, I didn't want to turn on the oven nor did I want to bother making a white sauce, so I took the easy way out and just took small kale leaves, washed them, shook off the excess water, and then sprinkled them with a cinnamon-sugar combination to serve as an admittedly very unusual side salad along with the soup above.

The kale leaves were not excessively sweet, in fact they tasted as if a few pieces of fruit were added to a green salad, a complement of flavors that were just right. 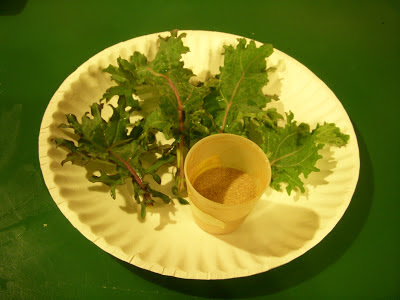 This Garlic-Kale Soup recipe will become part of our typical rotation of preferred meals. It was simply scrumptious using both chicken broth mixed with garlic broth. However, I am also looking forward to making it with some of our frozen fish/seafood broth and some cooked diced potatoes instead of pasta. The variations are endless and certainly all delicious.

Where kale is more than decoration on my plate.

I love kale Diana, but what I don't get is: isn't it a winter vegetable? Kale here in Britain does not quite taste right till it has had a few frosts. Do you grow a special all-year variety? On the photograph it looks exactly like our 'raggedy jack'.

Kale and other Brassica vegetables are at their peak of flavor after a frost, which signals more sugars to be made in their cells to function as a type of anti-freeze solution, which is why these cold-tolerant plants gained such a prominent place in the cuisines of people in northern climates.

However, kale can be very tasty eaten year-round albeit with with more of the bitter flavors typical to Brassicas.

Thanks for answering so quickly. So now it is only my preference for whatever-is-best in a particular season which will make me go over to lettuce, sugar peas and sweetcorn in summer!
By the way, I've mentioned '365 days of kale' in my Facebook-blog accompaniment (www.facebook.com/pages/Thought-for-Food/421203291261586), I hope that's ok. Love, Annemieke.

Thanks for the shout out on your FB page. There are so many Brassica vegetables to eat year round so enjoy them all! No need to limit yourself to kale. :)