Yes, yes, I know it has been MONTHS since I posted. Farming is full-time work, or should I say "full-time-plus" work, so all of my blogs have been post-less for months and months. For those of you who do wish to keep up with our farm though, I do manage to write short updates on our farm's Facebook page (our garlic is now fully planted for next year's crop, just in the nick of time, as winter really came early this year in SE Michigan).

In any case, here is a delicious and beautiful recipe featuring kale and other fall crops. Strata recipes are perfect for brunch or perfect for supper. Like casseroles, they are nearly "one-pot" meals. We served this strata for company at lunch with just a simple spinach salad and applesauce, which was perfect.

Full disclosure, this recipe takes some effort and time for assembly and cooking. It is not a quick, throw-it-together and forget-about-it type of meal. However, all the prep and assembly can be done ahead of time (which I did) so I had plenty of time to spend with our good friends, which is what good food is all about!

Ingredients:
• 2-1/2 Tbsp. butter
• 2# butternut squash (peeled, seeded, diced into 1/2" pieces - I weighed this out and saved the rest of the squash to use later)
• 1/4 cup olive oil (I rarely measure my oil, always using less than called for)
• salt
• pepper, freshly ground
• 4 medium leeks (trimmed of roots and using the white portion plus ~2 inches of the greens - slice down the middle length-wise to carefully clean)
• 3/4# kale, trimmed of most of the stalks, and then chop the leaves coarsely (I weighed the kale before I trimmed the stalks, but feel free to be flexible here)
• 4 (or more) garlic cloves, minced small - we're a garlic farm so of course we used more!
• pinch of crushed red pepper (I used powdered cayenne pepper)
• 1 teaspoon finely chopped dried thyme (or 2 teaspoons fresh)
• 1/4 cup white whole wheat flour
• 3-1/2 cup whole milk
• 1/2 cup unflavored yogurt
• 1 teaspoon honey
• 8 large eggs (I used our own for this recipe!)
• 3/4# multi-grain bread, cut into 1" pieces (I weighed this rather than just guessing)
• 1/3 cup freshly-grated hard cheese

2. In a large bowl, toss the diced squash with about 1 Tbsp. oil and season with a small amount of salt and pepper. Spread squash on a rimmed baking sheet (I first lined it with parchment paper) and bake for ~25 minutes at 425 until tender.

4. While the squash is baking, clean and slice the leeks, heat ~1 Tbsp. oil in large skillet and cook over medium heat about 25 minutes until golden but not burned. Scrape into the bowl used to toss the squash with oil.

Cook's Note: the most useful new kitchen tool I have begun using this past year has been a "Simmer Mat" - please note that this statement is not an 'ad', just a statement of fact, which keeps many things from burning on our unpredictable stovetop burners. Thanks to our friend GB for giving it to us!

5. While leeks are simmering, cut up the bread into 1-inch pieces and place into the bowl that was used to toss the squash with oil.

6. Next, while the leeks are still simmering, peel and mince the garlic, wash the kale, shake dry, chop off the stems (we feed these to the chickens who pick them clean), and then chop the kale leaves. In the same skillet, heat the garlic, kale, red pepper and thyme seasoning, salt to taste, until kale is wilted and just tender (about 5 minutes, no more). Scrape out of pan into bowl with the leeks.

7. In a large sauce pan, melt about 2-1/2 Tbsp. butter, add the flour and cook over moderate heat (on that simmer mat) until a light golden paste forms, whisking constantly, about 3 minutes (this is not the time to be trying to look ahead in the recipe). Whisk in 1 cup of the milk and cook until very thick, which may be 8-10 minutes, whisking very often.

8. Remove saucepan from heat, slowly whisk in the remaining 2-1/2 cups of milk, 1/2 cup of yogurt, honey, a small amount of salt and pepper (about 1/4 teaspoon each). Let cool completely.

9. Beat eggs into the sauce with a whisk. (it was so much fun to watch the white sauce turn into a golden-yellow sauce from those gorgeous deeply colored yolks from our chickens)

10. Add the roasted squash cubes to the same bowl with the other vegetables and bread cubes. Mix all together until evenly distributed.

11. Then finally add cooled sauce to the bowl, carefully stir until all is mixed, pour mixture into the greased baking dish, let stand for 30 minutes, pressing down on the mixture occasionally to make sure the bread absorbs the liquid.

13. Bake the strata for 55-60 minutes at 325F. until almost set. Increase the oven temperature to 475F. Sprinkle grated cheese over the top and bake for 10 more minutes. Remove from oven and let stand for ~15 minutes prior to serving.

14. Serves 8-10 easily as this is a hearty dish served with a simple salad and fruit for sides.

Here is the photo from FoodandWine.com, as we ate our meal much to quickly to photograph it myself. The dish met with RAVE reviews from my husband and all of our guests. It was definitely worth the time it took to make this recipe. I hope you enjoy it as much as we did! 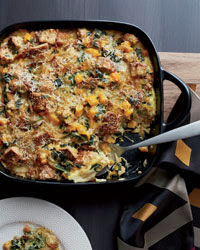 Where kale continues to be enjoyed beyond decoration on my plate (just asking, does anyone still do that anymore?),